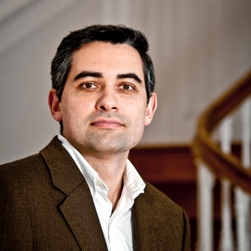 Pedro Vicente is an Associate Professor of Economics at Nova School of Business and Economics and the scientific director of NOVAFRICA. Pedro researches on development economics, with an emphasis on political economy issues, and a special interest in Africa. He designed and conducted fieldwork (including randomized field experiments) in Angola, Mozambique, Nigeria, Cape Verde and Sao Tome and Principe.
He has published articles in top field journals such as the Journal of Development Economics. Pedro holds a Ph.D. in Economics from the University of Chicago, and is affiliated with BREAD and with the CSAE at the University of Oxford.
He is Lead Academic for Mozambique at the IGC, a consortium between the LSE and Oxford, and a consultant for the World Bank.

Economics, Doctorate, The University of Chicago

Open Access
File
Mozambique
election
voting
campaign
social network
Your message has successfully been sent.
Your message was not sent due to an error.
If you made any changes in Pure these will be visible here soon.