BIN1, one of the strongest genetic risk factors for late-onset Alzheimer’s disease, encodes a protein that dabbles in many cellular functions, taking a hand in Aβ production, tau propagation, and microglial function. Now, in the March 10 Cell Reports, researchers led by Gopal Thinakaran at the USF Morsani College of Medicine in Tampa, Florida, tie it to synaptic transmission, as well. At least in mice. The BIN1 protein clustered with presynaptic vesicles at excitatory nerve terminals, the authors found. Neurons lacking the protein were less likely to release these vesicles upon electrical stimulation. Their reticence dampened neuronal signaling and impaired spatial memory. Thinakaran previously discussed the data at the 2019 AD/PD conference (May 2019 conference news).

“These results raise the intriguing possibility that presynaptic BIN1 alterations may contribute to memory impairment [in Alzheimer’s disease],” Michael Ewers at Ludwig-Maximilians-University in Munich wrote to Alzforum (full comment below). He was not involved in the research. 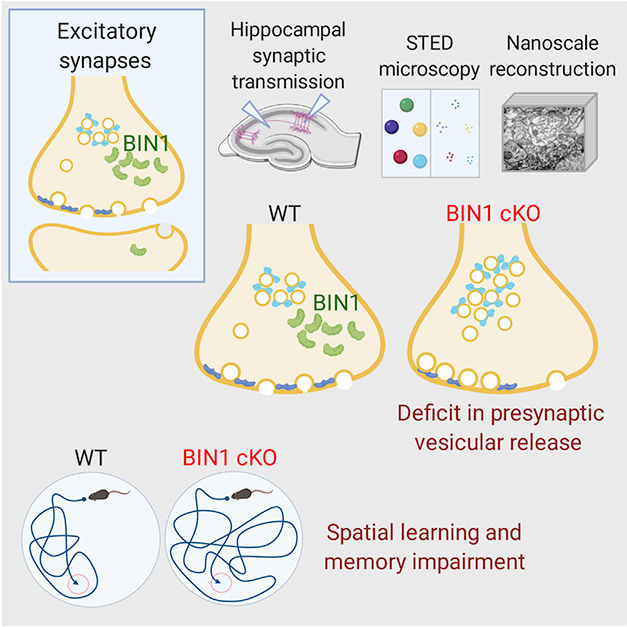 Thinakaran and colleagues explored the synaptic effects of conditionally knocking out BIN1 in neurons. First author Pierre de Rossi generated mice that lost the gene in cells with an active Syn1 promoter, i.e., primarily neurons in the hippocampus and to a lesser extent in the cortex. The authors prepared hippocampal slice cultures from these BIN1 knockout mice and wild-type controls. Knockout neurons were less likely to release synaptic vesicles upon stimulation than were controls. Curiously, however, they maintained synaptic transmission longer than did controls during sustained stimulation. Together, the results suggest Bin1 knockout neurons keep a larger pool of synaptic vesicles in reserve.

Electron microscopy bore out these findings. Axon terminals of knockout neurons contained more docked vesicles, and a larger reserve pool of vesicles, than controls. Super-resolution STED microscopy revealed alterations in several presynaptic proteins, with the density of synaptoporin, synaptotagmin-1, and Munc13-1 down, and synaptophysin, synaptojanin, and Rab5 up. The net effect of these changes would be to retard vesicle release, Thinakaran noted.

In addition to these presynaptic changes, Bin1 knockouts had fewer hippocampal synapses than controls. In the latter, most BIN1 loitered in axons, where it associated with clusters of synaptic vesicles. In excitatory neurons, 21 percent of presynapses and 6 percent of postsynapses contained the protein (see image below). 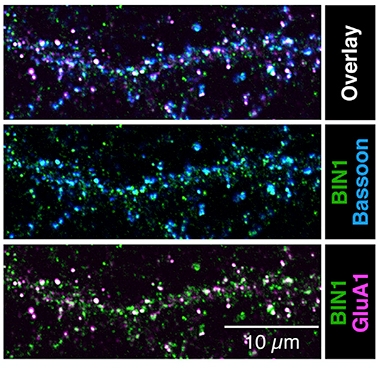 Behavioral testing supported the idea of neurotransmission deficits. Knockout mice were unable to learn the location of a hidden platform in the Morris water maze, a test of hippocampal spatial memory. Other frequently tested forms of mouse learning, however, including fear conditioning, novel object recognition, and the Y maze, appeared normal.

The authors tested a second conditional BIN1 knockout model using a broader promoter, Emx1. It excised the gene in hippocampal and in cortical excitatory neurons, and also in glia. This model had similar alterations to presynaptic proteins as Syn1-BIN1 knockouts did. The Emx1-BIN1 knockouts fared poorly in the Morris water maze, and struggled to remember objects they had seen before. This additional memory impairment might be a result of BIN1 loss in forebrain neurons, which participate in recognition memory, the authors suggested.

Gunnar Gouras at Lund University, Sweden, praised the use of several types of high-resolution microscopy along with behavioral data in two knockout models. “This is an excellent study that provides novel and convincing evidence for BIN1 acting in regulating release probability at presynapses,” he wrote to Alzforum (full comment below).

Thinakaran and colleagues did not look at whether any of the BIN1 AD risk variants affected synaptic transmission. A recent study by Christopher Glass and colleagues at the University of California, San Diego, found that the main risk variant affects expression in microglia only (Jul 2018 conference news; Nov 2019 news). However, Glass told Alzforum that this finding does not rule out a contribution from other cell types, because transcription may change in the AD brain (full comment below).

Ewers agreed. “The current study adds to a heterogenous mosaic of BIN1 functions and their association with cognitive decline and AD dementia risk … Taken together, BIN1 related patho-mechanisms in AD are complex, and future studies combining preclinical research and investigations in AD patients will be needed,” he wrote.—Madolyn Bowman Rogers